Atlanta Braves left fielder Hector Olivera was arrested and has been charged with one count of misdemeanor assault and battery stemming from an alleged incident at the team’s hotel in Arlington, Va., on Wednesday morning.

Olivera, 31, was taken into custody by Arlington County Police at the Ritz Carlton in Pentagon City according to an official release from the department:

“On April 13, 2016, at approximately 6:51 a.m., police responded to a dispute at the Ritz Carlton located in 1200 block of S. Hayes Street. A female victim alleged that a male suspect assaulted her. The female victim had visible bruising and was transported to Virginia Hospital Center with non-life threatening injuries. The male suspect remained on scene and was taken into custody. Hector Olivera, 31, of Miami, FL, was charged with assault and battery and bond was set at $10,000. 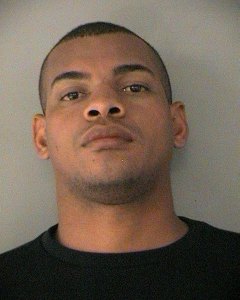 Olivera has posted bond according to Jeff Goldberg of WJLA (ABC7News) and was en route to the airport as of 6:00 p.m. on Wednesday. The alleged victim was treated and released earlier in the afternoon. Major League Baseball issued the following statement:

“Consistent with our Joint Domestic Violence Policy, the player has been placed on administrative leave and the Commissioner’s Office has begun an investigation.”

MLB put its domestic violence policy into effect last August, giving Commissioner Rob Manfred the “authority to discipline [which] is not dependent on whether the player is convicted or pleads guilty to a crime.” Yankees pitcher Aroldis Chapman received a 30-game suspension for a domestic violence incident in March, while Rockies shortstop Jose Reyes is still awaiting discipline from the league following an incident last October.

The administrative leave period can be as long as seven days while the league gathers information and decides the discipline. Meanwhile, Olivera has been placed on the restricted list while that investigation takes place. The Braves issued the following statement:

“We are extremely disappointed and troubled to learn of the allegations involving Hector Olivera. We will continue to gather information and will address this matter appropriately as we determine the facts.  Major League Baseball has placed Olivera on Administrative Leave effective immediately.”

Olivera was batting .211 with two RBI in the team’s first six games, but did not play on Tuesday, the second contest of a four-game series against the Washington Nationals. Atlanta has called up infielder Daniel Castro to take Olivera’s place on the active roster.

Grant McAuley covers the Braves for 92-9 The Game. He is the host of “Around the Big Leagues” every Sunday from 6-8pm. You can follow Grant on Twitter.  Subscribe to the podcast on (iTunes).

The Atlanta Braves have announced the 25-man roster that will head north to begin the 2016 season. Opening Day is Monday against the Washington Nationals at 4:10 p.m.

Among the moves the Braves made on Saturday to trim the roster to 25, veteran outfielder Michael Bourn and infielder/outfielder Emilio Bonifacio were both designated for assignment. Right-hander Jhoulys Chacin, who joined the team on a minor league deal, will begin the season with Triple-A Gwinnett after being reassigned. He stands to join the club on April 12, the first time Atlanta will need a fifth starter.

In addition, the Braves placed four pitchers on the 15-day disabled list – LHP’s Manny Banuelos (retroactive to March 25), Jesse Biddle, Andrew McKirahan and RHP Shae Simmons. Lefty reliever Paco Rodriguez had previously been placed on the 60-day disabled list (February 20). All five of those pitchers are dealing with elbow injuries.